This is my Grandma Brown when she was visiting Marathon, Florida ten years before I was born. She was the best grandma ever.

Grandma Brown made peanut brittle from scratch. She made toys from fabric and discarded clothes that her neighbors would give her. We, as little children, did not think to wonder where the piles and piles of material and stuffing came from, we just loved our toys, like this wee little Scottie dog. 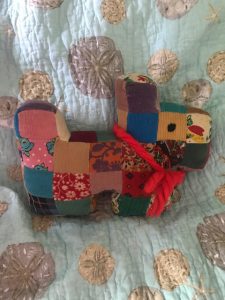 For the young people reading this, grandmothers back in the day recycled everything just because, and my Grandma cut the feet and crotches off of used nylon stockings, washed them, and that’s what she put in our toys.

My favorite memories of Grandma Brown were when she loaded up three of four grandchildren in the back of her station wagon and we went blueberry picking. Blueberry picking was really, really fun because, according to Grandma, we were trespassing. Shhhhhhh. How do you get little children to behave? Tell them they could be big trouble if we got caught…brilliant…we quietly picked blueberries for hours.

Grandma Brown loved seahorses.  For years, I didn’t understand why I had memories of seahorses living at my Grandma’s house until I realized that she had curtains lined with the silhouettes of seahorses.  These magical creatures conjured up for me, memories of homebaked yummies and playing cards with my cousins, on Grandma’s porch, while summer rain cooled the air.

Anyway, the reason I bring this all up is that I would never, ever want my Grandma to be treated the way that grandmothers, and other members of our senior community, are treated today by the Los Angeles County probate court.  Listen:

It’s a tough conversation to have with someone who has a modicum of common sense and a protective spirit towards her elderly loved one, now suffering from dementia. Of course, I can do the paperwork to have a conservator appointed.  But, I never recommend it unless there is truly no way to avoid it.

The Los Angeles County probate court now appoints a “PVP” attorney to be the ‘zealous advocate’ for each and every proposed conservatee. The phrase “PVP” stands for Probate Volunteer Panel, but only being on the panel is voluntary. Once appointed, this is very much a paid gig.

The PVP attorneys are told to be ‘zealous advocates’ for their mostly incapacitated clients. At one training event, they were told by a judicial officer to “pretend that the conservative walked in and handed” them $100,000.00.

PVP attorneys do not concern themselves with retainer agreements. They are literally not allowed to say “My client is incapacitated and cannot understand what is going on.” They cannot say “My client doesn’t recognize me from one moment to the next.”  They have been instructed to pretend that everything is normal.  In the case of Susan C., who suffered from the delusion that she was a NASA astronaut (she wasn’t) and had a boyfriend in the FBI who would take care of her (she didn’t) who lived in the attic of her apartment building (nope) – her “PVP” waltzed off with over $20,000 of her assets to “defend” against the appointment of a conservator.  A conservator was, of course, appointed.

PVP attorneys, therefore, unconstrained in their efforts by informed consent and common sense, do what they want to do and bill their clients without concern as to whether or not the clients consent or understand or even has a passing grip on reality.

Other counsel and I have taken ourselves off of the PVP roster because we could not bear to participate in a program that would exploit anyone’s grandmother, brother, uncle, child…by pretending that there is an attorney-client relationship when, in fact, there is not.   In several instances, I have observed the “zealous advocate” urge the Court to perpetuate circumstances involving elder abuse and the Court responds by doing so.

For this reason, I am beseeching my State Senator, Anthony Portantino, to take the lead and work towards changing the probate code. Like in so many other states, the Court should appoint a Guardian Ad Litem when it needs additional assistance.

Let’s put the Golden Rule back in Los Angeles County probate court and require the treatment of other people’s family members as we would like our own family members to be treated.

Only fiduciaries who hold an active license from the state of California will be listed on this site.

Only lawyers are given the opportunity to rate and leave feedback on fiduciaries.

It is vitally important that attorneys who understand the law, the vagaries of judicial rulings, and policies for each county’s probate court, participate in providing fair, objective and moderated feedback on fiduciaries with whom they have worked.

The clear majority of California Licensed Professional Fiduciaries have high ethical and professional standards for themselves and their colleagues.

Presented here is the greatest amount of information on the rated licensee, for your convenience and peace of mind.